An airlock is probably one of the first things a homebrewer should get. Beginner or not. If yours goes missing, or you simply haven’t got yours yet, there are a few inventive solutions. Airlock alternatives proposed by the craft brewing community.

I’ve browsed the most passionate home brewing forums, Reddit threads and blogs to determine what brewers have used to substitute an airlock. The answers were rapidly challenged and contested by others in a quite heated conversation.

Nevertheless, I’ve found some popular solutions to your problem. If you don’t have an airlock around, you can still protect your brew with a little creativity.

What is an airlock, anyway?

If you’re just getting started, these few paragraphs will tell you everything about such an important additament — the airlock.

As yeast turns sugars into alcohol, it releases CO2.

The carbonic gas is not only a byproduct of fermentation, but it also protects the beer from oxygen that could oxidize your beer, or even worse, promote bacterial growth.

That means you don’t want that carbonic gas to escape, it’s a protective barrier.

Of course, if the gas has nowhere to go, it will build up and could potentially cause your cap to pop, spilling all your hard work across the room.

An airlock allows CO2 to escape slowly while preventing oxygen from sneaking into your carboy or container. 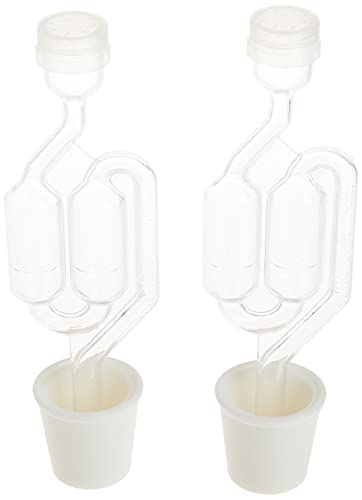 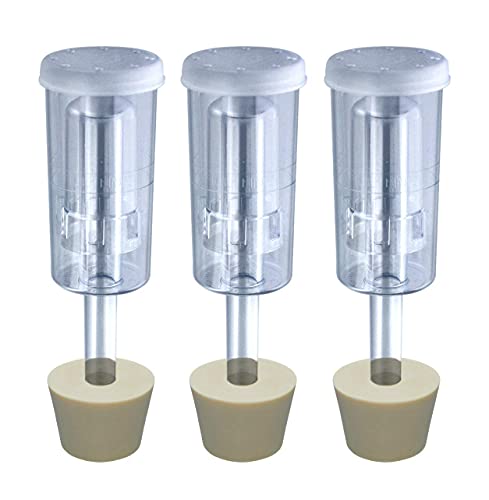 1) The aluminum foil or plastic alternative

Some home brewers suggest a properly sanitized aluminum foil crimped covering the mouth of the carboy is enough to keep your beer safe from any contaminating particle while allowing excess CO2 to escape.

If contaminants are your main concern, even a plastic bag strapped with a rubber band can protect your beer.

The idea behind this solution is that wild yeast and bacteria move with the air currents and can drift down into your container.

Other users promptly suggested this is a temporary solution.

As soon as the fermentation ends, gas emissions are not enough to keep oxygen at bay.

You would have to bottle immediately, or risk spoilage.

Bubble-type airlocks use small amounts of water to indicate if the beer is still releasing gas, something an aluminum or plastic cap won’t do.

Mainly used by homebrewers in lieu of an airlock, a blow-off tube takes care of the heavy lifting when an airlock isn’t just enough for a strong primary fermentation (first 3 to 5 days).

Use a hose with a 1.5” outside diameter and push it into the carboy’s mouth.

The other end goes into a jar of water, creating your own airlock.

Placing a rubber glove or a small balloon in the carboy’s mouth is another popular improvised solution.

The theory behind this creative technique is that the gas released will fill the rubber glove.

By pinching the glove or the balloon with a needle, one can effectively allow excess CO2 to escape from those tiny holes while preventing oxygen from coming in.

This method might let you see your balloon deflate as fermentation ceases, enabling you to act fast.

This idea was soon contested, mentioning the second the pressure drops inside the carboy, the balloon will allow air to be sucked in.

4) The loose lid method and the seal & burp method A popular solution, although not so creative, comprises merely closing the carboy with its lid but letting it loose.

Gas escapes, and oxygen has a hard time finding its way in.

Closing the lid entirely and letting the carboy ‘burp’ daily is also an efficient way of fermenting your beer successfully without an airlock.

Is an Airlock Really Necessary?

Airlocks are very good at what they do; they keep your ferment protected from contaminants and oxygen while still allowing the gas produced during fermentation to find a way out.

Airlocks are inexpensive and readily available; you can get them in any specialty store and online.

The question is, is an airlock really necessary?

Several home brewers have pointed out fermenting stuff has been going on for millennia, and it comes without saying people didn’t have airlocks around.

According to some sources, Leonardo da Vinci invented the airlock around 1500, and although there’s no hard proof of it, we can safely say the airlock is a relatively recent invention.

You must consider what you’re fermenting. An airlock might be necessary when fermenting beer or cider at home, but it might not be the case if you’re making a batch of kombucha or foodstuff like kimchi.

You can successfully ferment anything without an airlock, but being inexpensive and readily available, it’s simply better to get one.

On the other hand, wrapping plastic with a few punched holes in it, aluminum foil, or a plastic bag, a rubber glove or balloon, they’ll all work just fine.

Fermenting alcoholic drinks is all about experimentation, and any successful winemaker, cider maker or brewer must be able to adapt to the circumstances.

Being resourceful and solving problems on the fly is critical.

That’s why brewing is so much fun!