Brewing with an electric stove is not the preferred method of making homebrew, but it is definitely doable and can even be an advantage with smaller batches of beer. If you enjoy brewing, being able to brew on an electric stovetop gives you the freedom to brew year-round without interference from the elements. But how does it work?

There are several pros and cons to brewing beer on an electric stove or burner versus brewing beer in a traditional boiler setup. The following chart outlines some of these advantages and disadvantages:

Since there are many advantages and disadvantages of brewing on an electric stovetop or burner, brewers should weigh these options carefully before deciding to try a stovetop brew.

Keep reading to learn more about electric stove brewing and how to do it more easily to ensure a fun and hassle-free experience on your next batch.

Can You Brew Beer on an Electric Stove?

The answer is yes! Brewing on an electric stove comes with some constraints and conditions, but it is doable, especially for smaller or experimental batches of beer and extract brewing methods.

For would-be brewers who would like to make beer but cannot afford a full propane boiler setup, never fear!

You can still make beer if you have an electric household stove and the inclination to try it out.

Advantages of Brewing Beer on an Electric Stove

While most people don’t consider an electric stovetop as their go-to for brewing beer, if they’ve been brewing for an extended amount of time, it’s a good option for novices getting started if you don’t have all the necessary brewing equipment gathered up yet.

Here are some of the pros of using an electric stove for brewing beer:

Even though it is not the first option chosen by many brewers, brewing on an electric stovetop or burner brings plenty of benefits to the table.

If you are just getting started in brewing and want to start small, electric brewing might be a good option for you.

Disadvantages of Brewing Beer on an Electric Stove

While brewing on an electric stovetop or burn has its advantages, there are some notable drawbacks to using this method for brewing, as well.

Here are some of the disadvantages of brewing beer on an electric stove versus using a traditional propane setup:

There are several downsides to using an electric stovetop for brewing beer, but thankfully some of them can be mitigated as long as you have the right equipment.

Can You Get a Rolling Boil on Five or Six Gallons of Wort?

While it might take longer to get going than a propane setup, the answer is yes—you can get a strong rolling boil going in five or six gallons of wort on an electric stovetop.

There are a few extra steps you may need to take to get the temperature of the stovetop up, such as insulating with aluminum or other measures, but achieving a rolling boil on an electric burner can be done.

Should Wort Be Boiled Quickly?

The biggest concern with using an electric stovetop to brew beer is maintaining proper temperature, not getting to it.

If you keep your mash boil under twenty-four hours to prevent souring or other spoilage of the grains, mash and wort can be heated for many hours without causing a problem with the flavors in the beer.

The length of boiling time most strongly affects the gravity of a beer.

Beers that have been boiled longer end up with higher specific gravity, which results in more fermentable sugars and a higher alcohol-by-volume content for the resulting beer.

It is also crucial that the wort is cooled down adequately before being pitched or having yeast added to ferment the sugar in the wort.

If the wort is not allowed to cool down enough, it will kill most or all the yeast added, resulting in a beer that is cloying and low in alcohol content.

How to Make Wort Boil Faster on an Electric Stove

It may be harder to get your wort up to a boil on an electric stove versus a propane brewing setup, but that does not mean that it is not possible.

It may just take a little bit of improvising and some additional equipment to make sure the task can be done efficiently and without overloading the electric stovetop.

Here are some tips on how to make your wort boil faster using an electric stovetop or burner:

If you have a hard time getting your electric stovetop up to adequate boiling temperatures for a batch of homebrew, try some of the above tips, and you will likely have a much easier time getting the temperatures you need for your brewing project.

So, you want to use an electric range for cooking your homebrew to avoid having to use gas, but you do not want to dedicate your entire working kitchen to do it.

The good news is that there are plenty of electric boilers on the market that allow you to boil your beer on electric heat without taking up crucial surface area on your kitchen’s range or countertops.

Choosing an electric boiler is a good option for when you’d rather not have to work with propane, but you also don’t want to use your kitchen for brewing or don’t think that your kitchen stovetop will be able to conduct enough electricity to manage it.

Electric boilers present the best of both worlds—they can be conveniently located out of the high traffic areas of the household in a basement or garage, don’t require the use of propane that can lead to poisonous carbon monoxide build-up, and they are explicitly built for homebrewing as a portable standalone system, so you won’t have to dedicate any of your regular cooking space to use them.

Here are some of the electric brewing boilers available on the market: 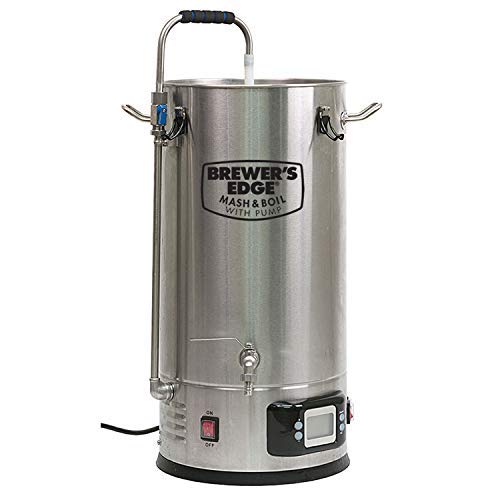 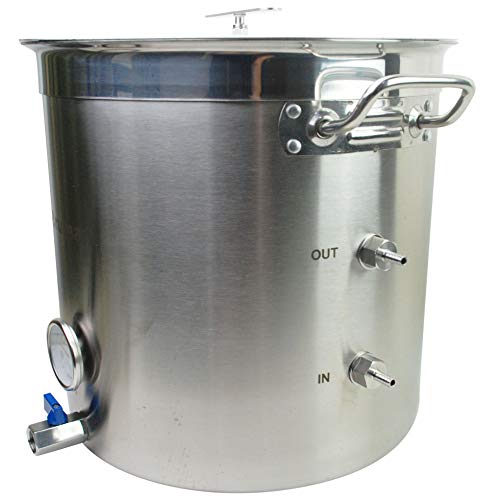 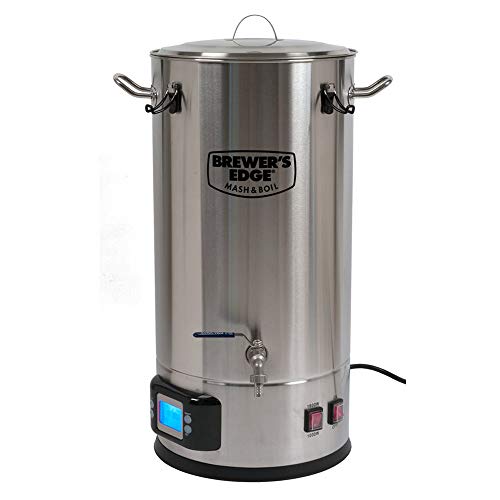 There are plenty of other types of propane boilers available to heat gas for conducting a beer boil more traditionally, but propane setups come with plenty of disadvantages.

If you are set on going electric for your brew but do not want to dedicate your kitchen’s stovetop to the project, an electric boiler is a perfect compromise.

Extract vs. All Grain: Which is Better for Electric Brewing and Why?

When it comes to sheer convenience and ease of brewing, doing a malt extract homebrew versus an all-grain brew is significantly easier if you are trying to conduct your boil on an electric stovetop or burner.

Here are some of the reasons why:

There is, however, one major challenge you will face when using an extract—they tend to stick to the bottom of the pot.

To prevent this, stir the mixture continuously.

All-grain, on the other hand, is a more difficult brewing process with many more opportunities for operator error, especially if you are working in small batches.

There’s much more physical work involved since you will have to buy the whole grains, mill them, and push water through a mash before you even begin the brewing process.

I have been obsessed with finding the best beers on earth for a long time. I eventually got to the point where I decided to start making my own. Since then homebrewing has become a new hobby of mine. More about me