To pure craft brewers, rice is a sacrilegious addition to pure beer, as it’s the main ingredient in Budweiser among myriad other mass-produced beers. However, its casing, the hulls play an invaluable part of brewing specialty styles.  Wheat beers, 100% wheat malt beers, and any beer with a significant portion of adjunct grain may need a handful of rice hulls to assure a proper sparge.

Mashes having more than 50% of huskless malts or grain need rice hulls for sparging. It imitates a pure barley malt grist. They add no flavor and will not affect the process. Without them, wheat beer sparging slows to a trickle and breaks the workflow. The-mash-is-stuck.

As a master brewer with 10+ years of professional brewing, I will largely discuss wheat beers, and briefly others beers that have 10 – 25% adjunct grain in the grist composition, namely: wheat, unmalted wheat, oats, flaked barley, rice, and corn. 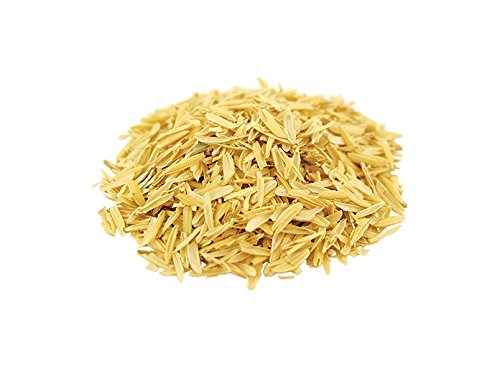 Homebrewers like the challenge of true German Weisse bier or Belgian bière blanche as they can be difficult to emulate well.

A traditional Bavarian Hefe-Weizen (wheat with yeast) contains at least 50% wheat, and some up to 70%.

Wheat malt is more expensive than barley malt, but price be damned, we are questing for greatness here!

The mash will hold 50%+ wheat malt and whatever barley malt suits.

If you are American, this could include quite an array, as we have become so adventurous and anti-conventional.

I personally stuck with 2-row pale malt only.

Malted wheat does convert with simple-infusion mashing (single temperature mashing: 149 – 158˚ F or 65 – 70° C) along with barley malt, so there are no worries of incomplete starch to sugar conversion.

The vorlauf is when it begins to turn on you, like a dog whose food bowl you dared touch.

How to use rice hulls

A mash with 50% or more of malted wheat and barley will stick in the sparge – full stop.

Wort and sparge water will all but cease to flow.

Adding rice hulls give the wheat a shell to filter through.

The mash will then behave like a 100% barley mash.

How much rice hull to use?

If 5 pounds of the mash is wheat, one could safely add 2.5 pounds of rice hulls; about 50% to wheat ratio.

You do not need to hydrate them, just thoroughly mix them straight into the grist.

Include mash water in the same ratio as the grain.

Experiment with it and after 2 – 3 tries, it will become like second nature how much to use.

The mash will become very puffy and take up much more space.

If your mash-tun is small do be aware of this.

It could add an apparent 20% of mass to the mash, not by weight but by size.

Follow precise mashing and sparging procedures and the beer is good to go, vorlauf, sparge, extraction, everything will be smooth sailing.

For an extensive and definitive discussion of sparging please check out, Fly Sparge is the Only Way to go to Really Maximize your Efficiency.

1. Impossible vorlauf of a wheat mash

Wheat malt has been dehusked so you will have nothing but a light shell around the crunchy endosperm inside.

Once mashed, this starchy (now sugary) goodness turns to mush.

During the vorlauf (recirculation), the cloudy wort is filtered back through the mash bed.

Instead of a few mm to a cm of pasty film on top, wheat gives an inch or more!

In this case, it is impossible to pass the wort through the mash.

Ordinary techniques like gently stirring the top 2 – 3 inches of the mash or making an x across the top are ineffective.

A wealth of info on vorlaufing is covered in the article, You Should Recirculate (Vorlauf) Your Mash. Here’s Why.

A mash should be firm but spongy.

It must allow water to pass evenly through the mash bed to leach out all the sugars made accessible by the conversion process.

Aside from the pasty top of the mash, the bed will become compacted, very hard and bricklike.

If water can make it through at all, which it will in tiny amounts, it will form fissures and rivulets, the paths of least resistance.

Much if not most of the sugar will be left behind.

Your purpose of the sparge is defeated, battle lost.

Another method to unstick is to stir.

Possible, but then defeats the purpose of vorlaufing and assures excess protein in the kettle.

Even so, the mushy wheat still clogs up the holes in the lauter tun or lauter manifold.

I can’t emphasize this enough. If brewing a heavily adjuncted beer, use rice hulls, with only a slight increase in batch cost.

I have experienced 3.5+ hour sparges for 5 gallons at home and 15 bbls. commercially when brewing wheat beer with no rice hulls. It is painful. A standard Hefe-Weizen – 30 years ago a unique defining flavor of premium beer in the North American market – has been the launching point of dozens of American off-shoots of wheat styles.

German Hefes were the first beer in our market that made it OK to have yeast in the bottle, and brought esters to the forefront of beer character, the famed banana-cloves aroma (Isoamyl Acetate – desirable in low levels but vicious in other contexts, such as fermentation problems).

American wheat, fruited wheat, and otherwise flavored or spicy styles with wheat have defined the American beer lexicon over the last decade.

Notice this is only about 20% of the total grist.

The sparge and extraction occurred within the normal parameters.

I recommended a bit more for homebrewers, as each system is different and commercial lauter tuns are extremely efficient.

Other styles that may need rice hulls

That said, with oats, flaked barley, unmalted wheat, and corn, some brewers could add up to 20 – 30% of the total mash.

This is a quality most wear with pride.

Here are some styles that utilize potentially high amounts of adjunct grain.

If just 10 – 20% of the total grist are adjuncts, hulls are likely unneeded.

The sparge must run smoothly for extraction and mental health.

Rice hulls or not, it’s you to experiment

I was a pure rebel.  If you told me I couldn’t do it, it’s the first thing I did.

“Sparging wheat beer is hard, use 50% wheat at most.” I was the first 100% wheat malt beer and Lambic-style brewer in our region.

In 1997 the first Asheville Abbey beer, clear as a banana, barely flocculating yeast rolled out of the Grundy tank at Jack of the Wood Pub.

My new friends and peers from Highland Brewing Co, John and Pete, came over to drink.  The beer was rough and unfinished (25 days), hey I was young. “This beer is pretty raw, there is slurry on the bottom of my glass,” laughed Pete. “Hey man, this is cool, I wish we could do this,” smiled John.