The next time you have a crystal-clear beer in your hand, you can thank Whirlfloc tablets.

As much as we like to think about beer as an all-natural product, several ‘external’ components are involved.

Don’t get me wrong, Whirlfloc tablets are actually a natural product made from Irish moss and purified carrageenan, but let’s start from the beginning.

Whirlfloc tablets are not necessary for homebrewing. They only allow to get rid of haziness in the beer. For hobbist that want a clearer brew, whirlfloc tablets can be added at the end of the boil.

Here’s all you wanted to know about Whirlfloc tablets, a subtle and practical solution for one of the most common problems for home brewers and commercial breweries alike- haziness.

Before we dig deep into this fining agent and its properties, let’s start by saying hazy beers are trending right now, and many brewers will compromise a little clarity to preserve their beer’s integrity.

Whirlfloc Tablets are just another tool on your belt, and you can choose to use it or not.

What are Whirlfloc Tablets?

Whirlfloc tablets are a fining agent that binds with proteins floating in your beer before or after fermentation, precipitating with them. The compound will reduce the haziness in the beer and will remove impurities, like unfermentable sugars floating around and other stuff. 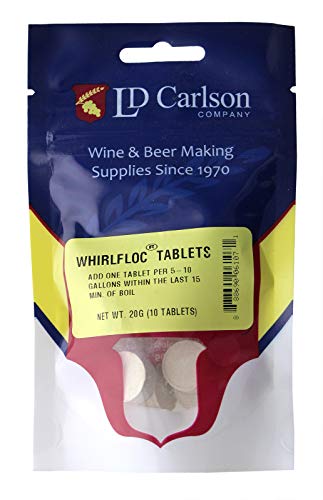 One of them is Irish moss, and the other one is purified carrageenan.

Well, they might not have the prettiest names, but these compounds are not only useful but also completely harmless.

The red-brownish algae is harvested in the Atlantic coast, both in Europe and North America, and it is made of 55% carrageenan.

Carrageenan is a natural thickener and stabilizer, and it has many uses.

It is used as a binding agent in gelatinous desserts in Asia, Ireland and the Caribbean, and helps bind industrial sausages, cheese and ham. It is used in the paper industry too, and of course, it’s the fining agent of choice for beer making and sometimes wine.

The stuff has been used since the fifteenth century, and today it’s all around us.

This is just the tip of the iceberg.

How to Use Whirlfloc Tablets

Using Whirlfloc tables to clarify your beer is relatively easy. If you’re using all grains, add the tablets during your boil’s last five minutes.

Keep in mind the active ingredients in the tablets are quite fragile, especially when subjected to extreme heat.

Boiling the carrageenan for too long will make it ineffective.

For less complicated recipes, like when you’re using malt extract or other fermentables, including apple juice, then you can simply add the Whirlfloc tablets at the end of the fermentation.

Dissolve the tablets well, allowing them to thoroughly combine with your beer before letting the mixture rest undisturbed to allow the compound to bind with the proteins and precipitate.

There’s no stirring needed, but you’ll want to siphon your beer after the process is done, unless you have a sediment trap.

Keep in mind dry hopping your beer will result in more sediment and cloudier beers, that’s normal, and no amount of Whirlfloc tablets will help.

I should also mention that racking (transferring) your wort into the secondary vessel carefully will eliminate most sediments naturally.

How much to use?

One Whirlfloc tablet will work for 10 to 15 gallons of wort, and since you’ll probably producing 5-gallon batches, you should only use half a tablet.

Why Is Your Beer Hazy?

Now that we’ve talked about Whirlfloc tablets and what they do, and before mentioning a few alternatives, let’s address the elephant in the room, why is beer hazy in the first place?

There are 2 causes for haziness.

There are several alternatives for Whirlfloc tablets. The first option is obviously leaving the beer, as is. If you’re really into the artisanal craft beer scene, you won’t mind a little haziness, and your friends won’t mind either.

Now, if you insist on getting a clear beer, then try this.

If you want to go all-natural, you can always cold condition (or cold crash) your beer.

This method is quite popular with lagers, but you might have already guessed only the most sophisticated fermentation tanks with temperature control can achieve this.